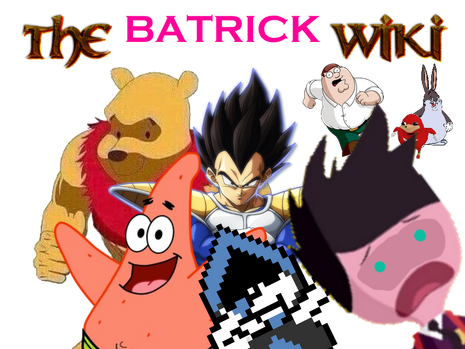 Hey character from whatever

Welcome to the wiki of the worst Hey Beter ripoff. Memes are here for u

Where the hecc did Hey Batrick originate from?

Hey Batrick first originated from a poorly made MS Paint meme, featuring the titular Batrick from Spongebob Squarepants and a buff, christian form of Winnie the Pooh nicknamed "Yellow Frick". Whilst only 2 were created, the series started to continue and opened a Discord server with multiple comic strips and a fanmade film being produced by roleplay. We have no clue how this is still a thing, but it's hilarious so we don't fricking care. Or maybe not.

People who actually care for this

Pepperboi: The creator. He forget about this for a long time, but now he is always saying there's big plans for this.
Jamie261: A memer that didn't start making memes with paint.net until 2019. He talks about Don Patch from Bobobo-bo Bo-bobo, RWBY, Osmosis Jones and other stuff that have nothing to do with Batrick. (yeah come and change this, its outdated -pepperboi)

What is going on right now?

Community content is available under CC-BY-SA unless otherwise noted.